ike many successful projects that have evolved here in San Francisco, the First Annual International Ms. Leather competition is the child of many parents. Scheduled to take place on Saturday, March 21, the contest is a fundraiser for AIDS charities as well as being a first of its kind opportunity for women from around the world to come together in celebration of a variety of leather lifestyles. Organizers View it as a kind of alternative rite of spring with dramatic impact on a segment of the

lesbian community that has often been either invisible or ignored.

It is also turning out to be one of the hottest tickets in town. The preliminary event in January sold out and generated considerable attention in the national gay press. Since winning the local title, Ms. San Francisco Leather, Shadow Morton, has been caught up in a whirlwind of fundraisers and public events. Suddenly, Leatherwomen are in high profile, and this phenomena is directly attributable to the forthcoming competition. ‘

A glance around Amelia’s or the Baybrick confirms that leath-

Later that evening, Saturday, March 21, the Barbary Coasters Motorcycle Club will celebrate their 2lst Anniversary. The club will announce their officers for 1987 and will make a very special announcement, so be there to hear the news. The anniversary will be held at the New World (formerly the Ramrod) from 7 to 10 pm.

The Warlocks Motorcycle Club will host their open meeting Friday, April 3, at the San Francisco Eagle’s patio at 8:30 pm. A 50/50 charity rafﬂe will be held with the funds being donated to Coming Home Hospice. The winner of the rafﬂe will also receive a ticket to the Warlocks’ Easter Run to be held April 19. The club would like to thank all of those who attended their March open meeting for their generosity of canned goods and monetary donations to the San Francisco AIDS Foundation’s Food Bank, and congratulations to Deena Jones for winning the raffle which entitles Deena to a free Easter Run ticket.

Their Most Imperial Majesties, the newly elected Emperor and Empress of San Francisco, Patrick McGonigle and Tina Tanner, and the Imperial Board of Trustees are pleased to announce the Investiture 0f the Imperial Court of the Golden Gate. It will be held at the Crystal Ballroom of the San Franciscan Hotel (Market at Eighth Street) Satur-

day, April 4. The affair starts promptly at 7:30 pm. Tickets are $20 and 3515 (main floor) or 310 (balcony) and all seats are reserved. Tickets are available at The Galleon or from Emperor Patrick, Empress Tina, or from members of the Imperial Board .of Trustees.

A special welcome to the newly appointed members to the Council of Empresses. These individuals were appointed by the outgoing Empress, Sable Clown, at Coronation 1987 for their outstanding support during her reign. They are: Michael Haas, Imperial Prince of Legends and Magic; Fern Way (Spike), Imperial Prince of Magic; Joey LoCoco, Imperial High Priestess; and Keith Osborne, Knight to the

Also, special congratulations to Lily Street, who by virtue of her placement in voting from the recent election for Empress, is the newly appointed PrinceSs 1mperiale IV of San Francisco.

By the way, Phyllis, Jacquline and I would like to know when we can get our 32. We voted in the last election and I’m sure it was an oversight that you missed paying us off! A very special get well to B.A.R. publisher Bob Ross, and hope you’re feeling better. Also, to Joshua, it’s great to hear that you’re bouncing back and can’t wait to chat with you! Both of you are strong people and minor illnesses are not going to keep you out of the swing of things for long. That’s it for now. Warm hugs to all of you, and it was reassuring that the city was still intact when I’returned! Aloha Pumehana! O

er appreciation is growing rapidly. Last Saturday afternoon, Mr. S. Leathers on Seventh Street ﬂowed with a steady stream of customers, many of them women, who came to buy tickets, t-shirts, and a wide variety of leather clothing and accouterments. Custom leather designers are doing a booming business and, in some circles, what to wear to the competition is‘as hot a topic as piloting out is in others. Most of

these women are neither contestants, judges, nor organizers. For many of them, their purchases and designs represent a ﬁrst consideration of leather as something more than protective outerwear. For others it is a validation of longstanding personal taste and style. And there are those of us who are using this opportunity to bring our leather orientation out of the bedroom closet and into the wider world in which we move. This can be a heady process, as uncertain and fear-laden as coming out to our parents ever was.

Lesbian sexuality has long been poorly understood—even by lesbians themselves. Within the wider range of this misunderstanding, those of us who put an

At the center of organizational efforts to create and promote In-

(Continued on next page)

TWO DOLLARS PLUS TOLL, IF ANY. CALLERS MUST BE 18 OR OVER. 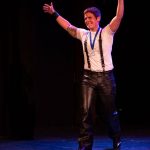